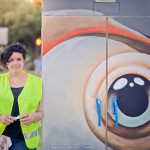 Ana María, “Anamarietta” was born and raised in Barranquitas, an agricultural town in the center of the Island of Puerto Rico. Known by the local art scene for her Humanoid creatures, Ana’s work has been recognized in multiple cities for the subtle brush stroke and shading of characters that seemed to be taken from a dream of a Biologist with excessive imagination.

I believe Peace is possible, I believe in common sense, Human Being is in constant war with everything; nature, time… himself.

I like to work thinking of the possibility of a devolution , some kind of situation where human “superiority” is proven wrong, as a consequence of the excessive effort to make the world accessible to our needs, based on believes that we are the superior Kind.

I play with organisms to create characters that can deprive of live at the minimal or inexistent provocation but they choose to stay still, they choose peace, that is, in my believe, a superior Virtue.

In my imagination, different dimensions of life and time collide to create characters with mixed phenotypes, animal and human, functioning parallel to a story that I feel, from anger, melancholy or love, every second I spend on the process… but only the spectator can tell.

For more information, check out http://www.anamarietta.com.