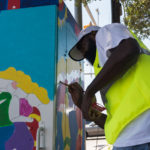 Brian Joseph started painting at the age of 33 in 1986. He created his own style based on the fictitious Bydee People, and thus he is called the Bydeeman. Bydee is an acronym that means Bringing You Delightful Entertaining Experiences. His paintings are as colorful as they are happy. The art focuses on education, promotes diversity and positivity in general. He is an artist, poet and a motivational speaker. Brian has 5 published books: Color Me Bydee, Happy Calypso Clowns, People Come In All Colors, Words of Bydee, We Love Teaching, and My Favorite Paintings. Some of his art commissions were for the Austin Revitalization Authority, National Alliance of Black School Educators, Texas Education Agency, Texas A&M University, City of Austin, Texas State Reading Association, The University of Texas, The Catholic Diocese of Corpus Christi, National Education Agency, National Association of Social Workers, Family Eldercare, and The North Texas Children’s Choir. Some of his mural commissions were for Colgate University, Auburn University, Advocacy Incorporated, Disability Rights of Texas, Best Elementary School, Kealing Middle School, Del Valle Junior High School, Blackshear Elementary, Del Valle Junior High, Oak Springs Elementary, and Cunningham Elementary School. Over the years Brian has received numerous awards and honors, including the TNOYS Spirit of Giving Award and The Austin Links Honoree of Community Arts Award. He was featured in KLRU television In Concept documentaries in 2008 and 2018. He has owned and operated Bydee Art Gallery in Austin for 25 years. Brian was born in Trinidad. He is a self-taught artist. He has a BA in Sociology and Anthropology from Tougaloo College and a MA in Urban Studies from Trinity University.

Brian resides in Austin with his wife Louise Lynch and is the father of 4 sons: Tijaon, Julian, Labeeb and Richmond, and also daughter Rosalinda. He has four grandchildren; Raeley, Naomi Rose, Kaden and Azra.