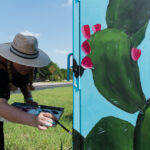 Christy Stallop was born and raised in El Paso, Texas. Her family was very encouraging in her artistic pursuits including ballet, piano, and art. In high school, Christy was president of the art club and was named most artistic student her senior year. Her fine art pursuits took a backseat during college when she decided to become an art teacher. After getting her degree in art education from St. Edwards University in Austin, Texas, she taught at a small tier 1 charter school in East Austin for 11 years. During that time, Christy continued her artistic endeavors by immersing herself in children’s illustration and became the illustration chair for the local chapter of the Society of Children’s Book Writers and Illustrators organization for 10 years. During that time she published several children’s books, and posters. Christy also traveled and continued her fine art education taking classes and workshops around the world including a month long stay in Florence learning ancient techniques such as egg tempura and Frescoes. In May, 2016, Christy decided to take a sabbatical to paint full time for a year. The sabbatical has been extended and painting has become her primary pursuit.