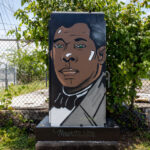 Eclipse the Earthstar (Danny Asberry El), Founder & President of Solel International, is an educator, visual artist, singer, performer and arts activist from Houston, Texas. He believes the arts have the potential to unify. It can speak in many languages without a translator and that the arts do not discriminate. That ideal helped birth Solel International. Eclipse enjoyed an honorable career in the United States Navy while being the only Moorish-American Illustrator Draftsman in its fleet and then later became a Mass Communications Specialist. He even performed for the Crown Prince His Royal Highness Prince Salman bin Hamad bin Isa Al Khalifa. Eclipse is a graduate of the Military’s Defense Information School (DINFOS) and American InterContinental University. He holds a BS in Fine Arts and MS in Business. His passion for the Arts community and education led him to Sheldon ISD, where he also became an art teacher.

Eclipse has been active in the Arts and Cultural community for over 17 years. He has played a crucial and influential role in multiple capacities of Performer, Teacher, Event organizer, Solutions Analyst, Grant Writer, Networker, Liason, and Curator. Recently Eclipse was awarded Teacher of the Year, a Congressional Award for his service as a veteran his work with Solel International and another Congressional Award for his musical performance.

Through Solel International, Eclipse the Earthstar plans to create a cultural center that specializes in developing critical conscious creatives of all ages. He advocates for the spectrum of arts including visual, performing and abstract arts in efforts to connect communities and preserve art for future generations.