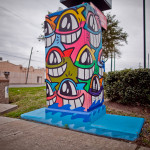 Percussion of the movement cataloged as Street-art, PEZ began painting in 1999 at that time, Pez discovers that with his character can transmit good vibes and positivism to the passers-by on the streets of Barcelona, in a few years begins to travel painting around the world and adopts the universal message of the smile with which it reaches the whole public.

The character of the Fish, comes from the experimentation and the desire to do something constructive on the walls of his city. His alter ego an always smiling fish is present in all his works, composed with much colorful accompanied by a load of positivism, a journey full of joy that goes from classic graffiti to experimental pop art.

PEZ is a must reference when we talk about urban art worldwide. His work appears in the most important books of Street art: “Street Logos” “ Ultimate street art” “The art of rebellion” “ The mammoth book of Street art” “Carnet de Rue” by the french artist J.R. “Graffifi and Street art (world of art) and many more… Its important to emphasize his appearance in the Banksy film “Exit Trough the gift shop” and his collaboration with big brands like Adidas, Toyota, Reebok. Ecko Ultd and Dictador.

His works was auctioned on the best street art auctions in France like “Tajan” “ Art Curial” “ Blancs Manteaux”.