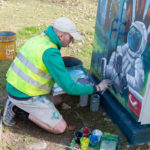 Roger Seward was born, raised, and is now painting in Houston, TX. He is a
self-taught creative focusing his production in acrylic paint on canvas. Roger
is a deep thinker in life, but he tries to convey a light, simple, joy in his
artwork. Subject matters for Roger’s work are rooted in scenes and sights around
Houston. Most notable and recognizable themes are Houston fire hydrants and
Houston’s grand trees. Roger also enjoys touches of quirk and surrealism, often
including or hiding exotic animals in strange locales. The overall mission of
his creativity is to produce laughter, a smile, and deeper thought in the
viewer. Roger is a full time artist passionately practicing to hone his craft.
Roger paints every day to improve his abilities and to maintain his sanity,
often taking is easel out into Houston’s parks to receive and provide
inspiration from his fellow Houstonians.