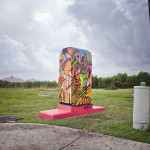 Born in the metropolis of Houston, Wiley Robertson’s journey began as a graffiti artist in the streets of the city in 1998. His early work was traditional freehand graffiti in aerosol form, but stencils, stickers, sign painting, wheat pasting and large murals quickly became his forte. As his curiosity of other materials developed, his work became more widely recognized around Houston, during which he created his unique, opulent and ornate style. Wiley attended the Kansas City Art Institute, where he studied painting. Although his formal training proved relevant as a traditional artist, his mother – a graphic designer and artist, his father – an artist and teacher, and artists Keith Haring, Basquiat, and David Choe, influenced him most.

Wiley’s work often engages a positive stream-of-conscious doodling-style that embraces pop culture, colors of the 80s, and never-dying, happy, pattern-filled worlds. Common subjects include typography, portraits, architecture, and people he observes. One of his most celebrated projects is “LOVE.” The word “LOVE” is painted on wood and affixed to light post and buildings. These can be seen around the greater Houston area at stoplights and light posts. They are mostly found in the Heights, Montrose, and in Downtown Houston.

Community collaborative murals are at the foreground of his most current work. These murals reside in lower to middle class latino communities. The idea behind these murals is to create an aesthetic where the community can feel that the mural reflects it, helping to create a sense of civic responsibility and pride. His community projects involve students and young adults from the surrounding areas that house these large murals.

Recent experience and commissions include: